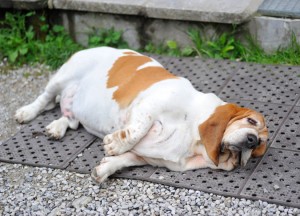 When it comes to canine obesity, sometimes the folks at Varsity Pets can get a little bogged-down in the minutiea. What’s the most effective regulatory regime for making Big Kibble tell the truth about the nutritional content of its products? What’s the target fat content of the optimal canine diet? How many calories should a 40-pound, intact, adult male canine athlete ingest each day? Interesting stuff, but sometimes a crisp, clear “big picture” statement is more powerful than dozens of little, detailed facts.

Take this little nugget, for example:

For dogs in the United States today, moderate obesity is both more deadly than smoking and more common than Facebook.

More deadly than smoking but more common than Facebook? No way, right?

Unfortunately, that’s what the published statistics show — that being just moderately overweight is more deadly for dogs than a lifetime of smoking is for humans, and that moderate canine obesity is more common in the U.S.A. than Facebook use.  Sound too bad to be true? Well, here are the sources, judge ’em for yourself:

1.  Being just moderately overweight (not morbidly obese) tends to shorten canine lifespans by, on average, about 14%.  (Link)

2.  A lifetime of smoking cigarettes tends to shorten human lifespans by, on average, about 11%. (Link)

4. Only about 43% of Americans are subscribers on Facebook. (Link)

If you think we’re missing anything then please feel free to leave a comment and point it out.  But it looks to pretty conclusive to us.

Canine obesity really is more deadly than smoking and more common than Facebook.

And when you’re confronted with facts like those, it’s pretty hard to deny that canine obesity is the single biggest public health crisis facing pets in the United States today.